FacebookTwitter
Delta, already a record-breaking storm after slamming Mexico’s Yucatan Peninsula, is forecast to bring “life-threatening” storm surge and dangerous winds to US Gulf Coast communities before it drenches areas much further inland in the following days, the National Hurricane Center said. 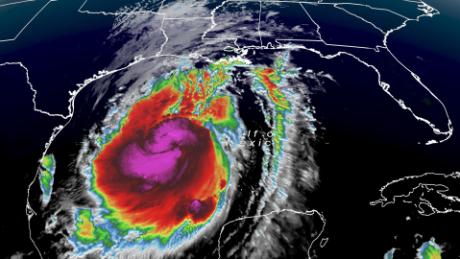 Hurricane Delta is about to hit nearly the same spot as Laura in Louisiana, just 6 weeks later
“You don’t have any time after today to prepare for this storm,” CNN meteorologist Chad Myers said Thursday. “Tomorrow will be too late.”
Delta’s maximum sustained winds have increased to 105 miles per hour as it moves northwest at 14 mph, still about 400 miles south of Cameron, Louisiana, the hurricane center said at 11 a.m. ET Thursday. Storm surge is still expected to reach as high as 11 feet in some places, and hurricane-force winds are expected to reach the coast Friday afternoon, the NHC said.
A hurricane warning has expanded west and now stretches from High Island in Texas to Morgan City, Louisiana. A storm surge warning is in effect from High Island to Ocean Springs, Mississippi, including Lake Pontchartrain and Lake Borgne.
Read More
TRACK DELTA’S PATH
The most significant threats Delta poses to Texas are high surf (or higher-than-normal waves), beach erosion and coastal flooding, the National Weather Service’s Houston offices said in a Thursday update.
Delta is predicted to strike the same southwest Louisiana communities still reeling six weeks after Hurricane Laura made landfall there as a Category 4 storm. Many homeowners are still living without roofs after Laura tore through and also destroyed parts of the power grid, Myers said.
In Lake Charles, Louisiana, where blue tarps still cover the shredded roofs of homes damaged by Laura, the mayor urged residents to evacuate by Thursday night, before Delta makes landfall.
“I know that we’ve been through a lot, and I know that we’re tired,” Mayor Nic Hunter said Thursday. “But we have a job to do right now, and that job is to keep ourselves safe, and your job is to keep yourself and your family safe.”
Kerry Anderson, whose Lake Charles home was damaged by Laura, said residents are “worn out” by repairing their community while facing the threat of another major hurricane.
“I think, really, the word is disbelief,” she told CNN affiliate KPRC. “Like, how could this be happening again?” 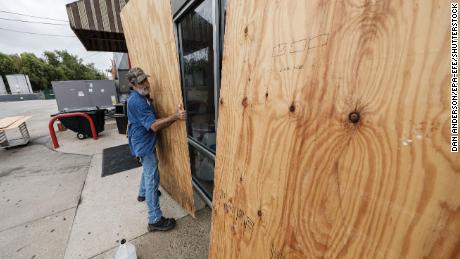 Parts of Louisiana could see up to 11 feet of water

Delta could unleash a powerful storm surge and tide that will flood areas near the coast that are usually dry, the National Hurricane Center said.
Almost the entire Louisiana Gulf Coast is under a storm surge warning, the NHC said in a Thursday update. Storm surge happens when “a strong storm’s wind push(es) water on-shore,” said CNN meteorologist Brandon Miller. “The wind literally piles up the ocean water and pushes it on the land.”
Areas from Rockefeller Wildlife Refuge to Port Fourchon in Louisiana, including Vermilion Bay, could see up to 11 feet of water, while places from Holly Beach, Louisiana, to the refuge could see up to 7 feet of water, the hurricane center said.
Areas between High Island, Texas, and Sabine Island, Louisiana, are expected to see between 2 and 4 feet of storm surge. The mouth of the Mississippi River could see the same. 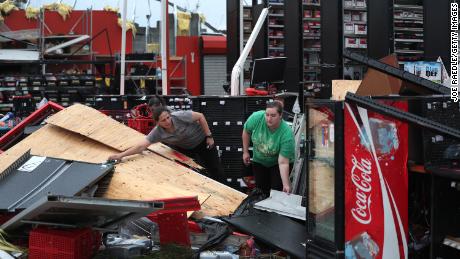 Some Louisiana residents won’t have power for weeks, if not months, after Hurricane Laura
Delta also could also drop up to 10 inches of rain Friday and Saturday southwest into south-central Louisiana, the center said. As the storm moves further inland, the Ohio Valley and Mid-Atlantic could also see several inches of rain.
As a result, “significant” flash flooding is likely in southwest Louisiana on Friday and Saturday, the NHC said.
Cameron Parish — the furthest west along Louisiana’s coast — has ordered a mandatory evacuation for the “majority” of the parish, the Office of Homeland Security and Emergency Preparedness said in a news release.
“These are unprecedented circumstances, and we realize a large portion of our residents are still displaced due to Laura,” the office said.
Officials also issued a mandatory evacuation in Calcasieu Parish, saying they expect powerful winds to begin late Thursday night. Hurricane conditions are expected in the warning area by Friday evening, the hurricane center said.

Louisiana has faced the brunt of an active hurricane season. Delta is forecast to be the fourth named storm to make landfall in the state in 2020, setting a record for the most there in one season.
Laura, which made landfall with 150-mph winds, left 15 people dead and others without power for weeks. The storm also knocked out the clean water supply for thousands of residents. 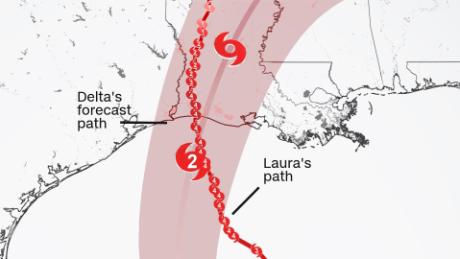 More than 10,000 homes in southwest Louisiana were destroyed in the storm, and 35,000 homes sustained “major damage,” Louisiana Gov. John Bel Edwards said at a Wednesday news conference.
More than 6,000 evacuees from that storm remain in hotels throughout Louisiana, while another 2,000 are housed in Texas, he said.
“This is the reality that many homeowners are facing as we prepare for Delta,” Edwards said. “Obviously, it’s not a very good situation.”
“This is not a bad dream,” Hunter, the Lake Charles mayor, said Thursday in a Facebook video. “It’s not a test run. These are the cards that we have been dealt. And right now, we have a job to do.”
Lynn Connor, a Lake Charles resident, is spending Thursday preparing his home for the impending storm.
“I kind of wish it was going somewhere else, but it doesn’t look like it,” he told CNN affiliate KPRC. “Got to get all my loose stuff up.” 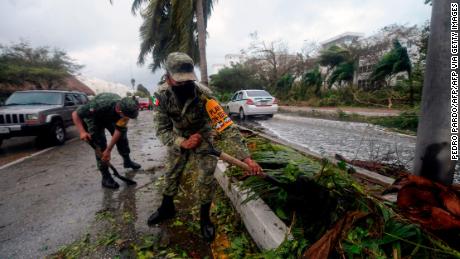 In Texas, the governor announced the state was preparing resources so it could be ready to respond.
“As Hurricane Delta moves through the Gulf, the State of Texas is supporting communities along the Gulf Coast and providing the resources they need to respond to this storm,” Gov. Greg Abbott said in a news release.
“Texans in the path of this storm should continue to heed the guidance and direction of local officials, remain cautious, and remember – Turn Around, Don’t Drown. We will continue to monitor Hurricane Delta and work alongside our local partners to keep Texans safe.”
The storm will mostly avoid states along the eastern Gulf Coast.
Still, Mississippi Gov. Tate Reeves on Wednesday declared a state of emergency, urging residents to “prep for the worst.”
“At this time, the heaviest rain and strongest wind is projected to be felt Friday afternoon through midday Saturday across Southwest Mississippi and further north along the Mississippi River,” the governor’s office said in a Wednesday statement.
Alabama Gov. Kay Ivey canceled a mandatory evacuation order for communities along the Alabama Gulf Coast, saying “projections have become evident and remained fairly consistent in that Southwest Louisiana looks to be in the direct path of this storm.”

Biden and Trump are failing the American worker