FacebookTwitter
The storm has spurred water rescues, sapped power, dropped trees and left serious flooding as it crawled at an agonizingly slow pace since Wednesday morning.
FOLLOW LIVE UPDATES
“We anticipate the evacuations could literally be in the thousands” David Morgan, sheriff of Florida’s Escambia County which includes Pensacola, said of rescuing people in flooded neighborhoods.
Water rescues have been reported in several coastal Alabama and Florida Panhandle communities. That includes Alabama’s Gulf Shores, where homes flooded and trees toppled onto roofs, city spokesman Grant Brown said.
Read More
A section of Pensacola’s Three-Mile Bridge that connects to the city of Gulf Breeze is missing, thanks to the storm, Morgan said.
“It’s going to be a long time, folks, … to come out of this thing,” the sheriff said. 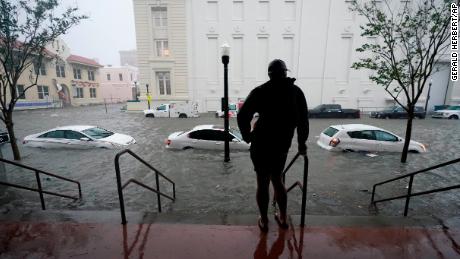 Sally made landfall as a Category 2 hurricane near Gulf Shores around 4:45 a.m. CT with sustained winds of 105 mph. The now-Tropical Storm Sally had winds of 70 mph around 1 p.m. CT.
With Sally’s slow pace — now around 5 mph — some areas already have collected more than 24 inches of rain and could receive up to 35 inches by storm’s end.

A flood emergency and a half million with no power

Floodwaters have turned streets into rivers in Pensacola, images from the Associated Press show. Pieces of hazardous debris “have become too numerous to list,” police there warned.
MAIN THREATS: INLAND FLOODING AND STORM SURGE
“Nothing is going to go away anytime soon,” National Hurricane Center Director Ken Graham told CNN on Wednesday morning. “The winds, the torrential rainfall, the slow movement and the storm surge — this is a dangerous situation all around.” 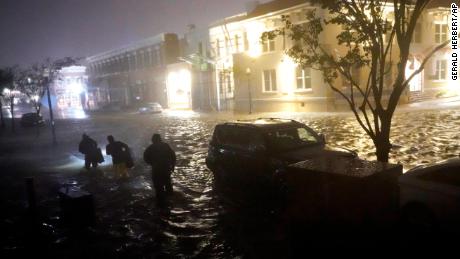 On Florida’s Pensacola Beach, sounds of transformers exploding and metal scraping along the ground — debris from torn roofs — could be heard early Wednesday.
Power has been knocked out for more than 500,000 customers in Alabama and Florida alone, utility tracker PowerOutage.us reported.
The National Weather Service office in Mobile declared a flash flood emergency for “severe threat to human life & catastrophic damage from a flash flood.” The warning zone covers parts of coastal Alabama and the Florida Panhandle, including Gulf Shores and Pensacola. 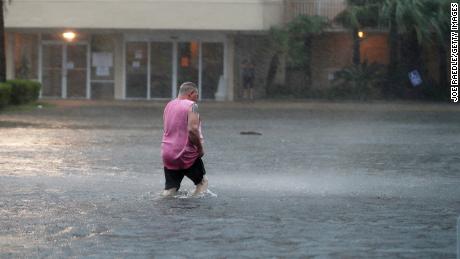 LIVE UPDATES
Rainfall totals of 10 to 35 inches are possible from Mobile Bay to Tallahassee, Florida, forecasters say.
Sally came ashore 16 years to the day that a Category 3 Hurricane Ivan struck roughly the same areas.
Sally’s slow forward speed is expected to continue through Wednesday as it turns to the north and then northeast, taking with it strong winds and more flooding potential.
Central Alabama and central Georgia could eventually see 4 to 12 inches of rain, with significant flash flooding possible. Parts of the Carolinas could receive 4 to 9 inches of rain by later in the week.
Mandatory evacuations were ordered for much of the coast and low-lying areas from Mississippi to Florida, and shelters opened to accommodate evacuees.

People have been calling for help in both states 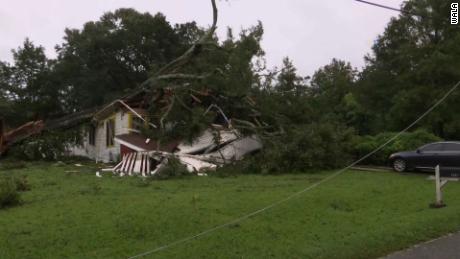 Damage and flooding in Alabama

In Alabama, the floor and walls on the 16th floor of a hotel on the northern rim of Mobile Bay groaned as Sally made its way ashore.
The building shook as if in the throes of an extended, low-grade earthquake, and sturdy windows seemed poised to pop out, a CNN team there said. 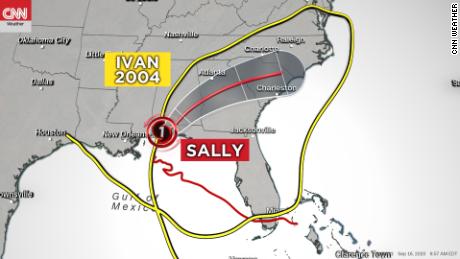 Hurricane Sally lands on the same spot as Alabama’s last hurricane 16 years ago
In Orange Beach, Alabama, water flowed at least a foot deep along the exterior walls of tourist shops, video taken from a moving boat by the United Cajun Navy before sunrise Wednesday shows.
At the shore, a boat sat on its side not far from an upended refrigerator, according to the footage, posted to Facebook.
Daylight revealed another loose boat had come to rest against an Orange Beach condominium building, a photo from resident Rich Florczyk showed. Flooded streets were littered with downed tree limbs and other debris.
On Dauphin Island, south of Mobile, “we’ve got trees down all over the place … (and) electricity has been shut off to the entire island,” Mayor Jeff Collier said Wednesday morning.
As wind and rain whipped even before midnight, enormous trees already had been felled west of Mobile.
Workers in raincoats endured Sally’s bands as they worked alongside a digger truck to move thick piles of branches at Campfire and Ponderosa drives, CNN affiliate WALA reported.
Similar scenes unfolded around the same time — still about six hours before Sally came ashore — in midtown Mobile and across Mobile Bay in Fairhope, Alabama. 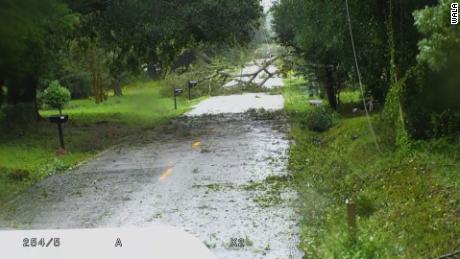 Residents prepared for a serious storm

People began preparing for Sally over the weekend, filling sandbags, grabbing supplies and prepping their homes. 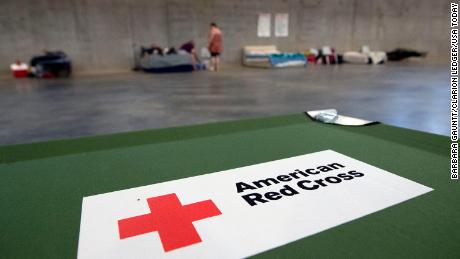 Merrill Warren of Summerdale, Alabama, which sits about 16 miles inland from the Gulf, told CNN he brought in furniture, purchased gas and other supplies, and got his generator ready for the storm.
On Tuesday night, he reported that heavy rains and winds of up to 39 mph had already hit inland. Warren was more concerned about the potential for increased rainfall and surges than anything else, he said.
“This isn’t the first Category 1 hurricane that I have been through. I have been there through Hurricane Nate and Tropical Storm Gordon,” Warren said. “I’m more worried about the rain for this one. … The rain and storms surge are definitely going to be the bigger issue with a storm moving at 2 mph.”