“Seinfeld” star Wayne Knight reprised his role as Newman the postman from the popular sitcom to hit back at President Trump for interfering with the United States Postal Service.

The actor, 65, donned a mailman outfit and made his anti-Trump stance very clear for the public service announcement (PSA) sponsored by the liberal group PACRONYM.

“Hello zip codes and you plus fours – you know who you are. According to this month’s old issue of Dr. Roberta Greenburg’s Time magazine subscription, there’s been a systematic, premeditated assault on the US Mail by President Trump and his so-called postmaster general,” Knight says in character, before spitting on the ground.

“That guy’s never even licked a stamp!” he continued. “They’ve had the unmitigated gall to try to slow down the mail. When everybody knows who can slow down the mail is a mailman! They’ve shortened working hours. They’ve got missing mailboxes. They’re decommissioning sweet, sweet sorting machines to try to delay voting by mail. And it’s not just your mail-in ballots you’ve got to worry about. Oh no-no-no-no. You’ve got to worry about your grandmother’s blood pressure medicine, your social security checks, military benefits, and millions and millions of Crate and Barrel catalogs.”

TAYLOR SWIFT SLAMS TRUMP OVER USPS DEBACLE, ACCUSES HIM OF CHEATING ‘TO HOLD ON TO POWER’

Knight called the U.S. Post Office debacle a “nightmare.” “When the mail stops, the world stops!” he added.

As Newman, Knight went on to declare he’s “not a political person,” noting that the last time he voted was “for flavor of the month at Baskin Robins.”

“But take it from me, a postman. If you want to vote early and in person, do it. You want to vote from home? Apply for the ballot and get it in as soon as possible. My brothers and sisters and I in blue will do our solemn best to make sure your ballot is delivered,” he said.

In a hilarious turn of events, Newman then opens a piece of mail, takes out a cookie and starts chomping on it as two unidentified men in black suits and masks behind him walk away with the U.S. Postal Service mailbox.

“Hey! You picked the wrong government employees to mess with!” he shouts. 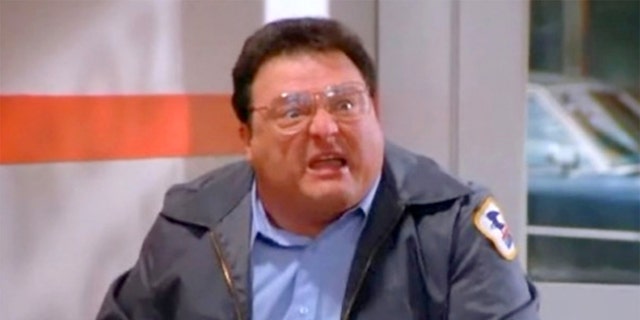 Newman then concluded with a message directly aimed at Trump.

“Alright Donnie, you know those tax returns? The ones you don’t want anyone seeing? You should never have mailed those,” he said with his signature sinister laugh.

Knight’s PSA adds to the long list of celebrities who have spoken out in recent months about Trump’s controversy with the U.S. Postal Service and mail-in voting. In August, Taylor Swift reacted to Trump’s reluctancy to help the cash-strapped agency on Twitter.

“Trump’s calculated dismantling of USPS proves one thing clearly: He is WELL AWARE that we do not want him as our president. He’s chosen to blatantly cheat and put millions of Americans’ lives at risk in an effort to hold on to power,” Swift tweeted.

Meanwhile, singer Cher expressed interest in becoming a volunteer at the agency, but a spokesperson for the USPS confirmed to Fox News that the agency does not accept volunteers.