Phillip Adams, a former N.F.L. cornerback, killed five people and seriously injured a sixth in the town of Rock Hill, S.C., on Wednesday before taking his own life, the authorities said.

Our deputies, first deputies arrived on the scene eight minutes after that, those two 911 calls were made. It’s a large area, and we began to assist the victims that we encountered. The first two victims, obviously, they we encountered were the two air conditioning techs, who were outside the home in the driveway at their work vans. Then we immediately began to assemble a team to clear the house of Dr. Robert Lesslie. Once we cleared the home, we found Dr. Robert Lesslie and his wife, Barbara, and their two grandchildren in a room in the back of the house, all deceased with gunshot wounds Once the investigation began, we were able to develop Phillip Adams as a suspect in this incident. We also learned Mr. Adams lived close to where this incident took place — just down the road, about a quarter of a mile. We were able later on in the evening to make contact with Mr. Adams’ father, who lived with the suspect at the time. We were able to remove Mr. Adams and later Mrs. Adams from the home as we had a search warrant for the home and for Phillip Adams. At around 2:30 a.m., we confirmed that Mr. Adams, Mr. Phillip Adams, that the suspect was deceased in a bedroom in the home. 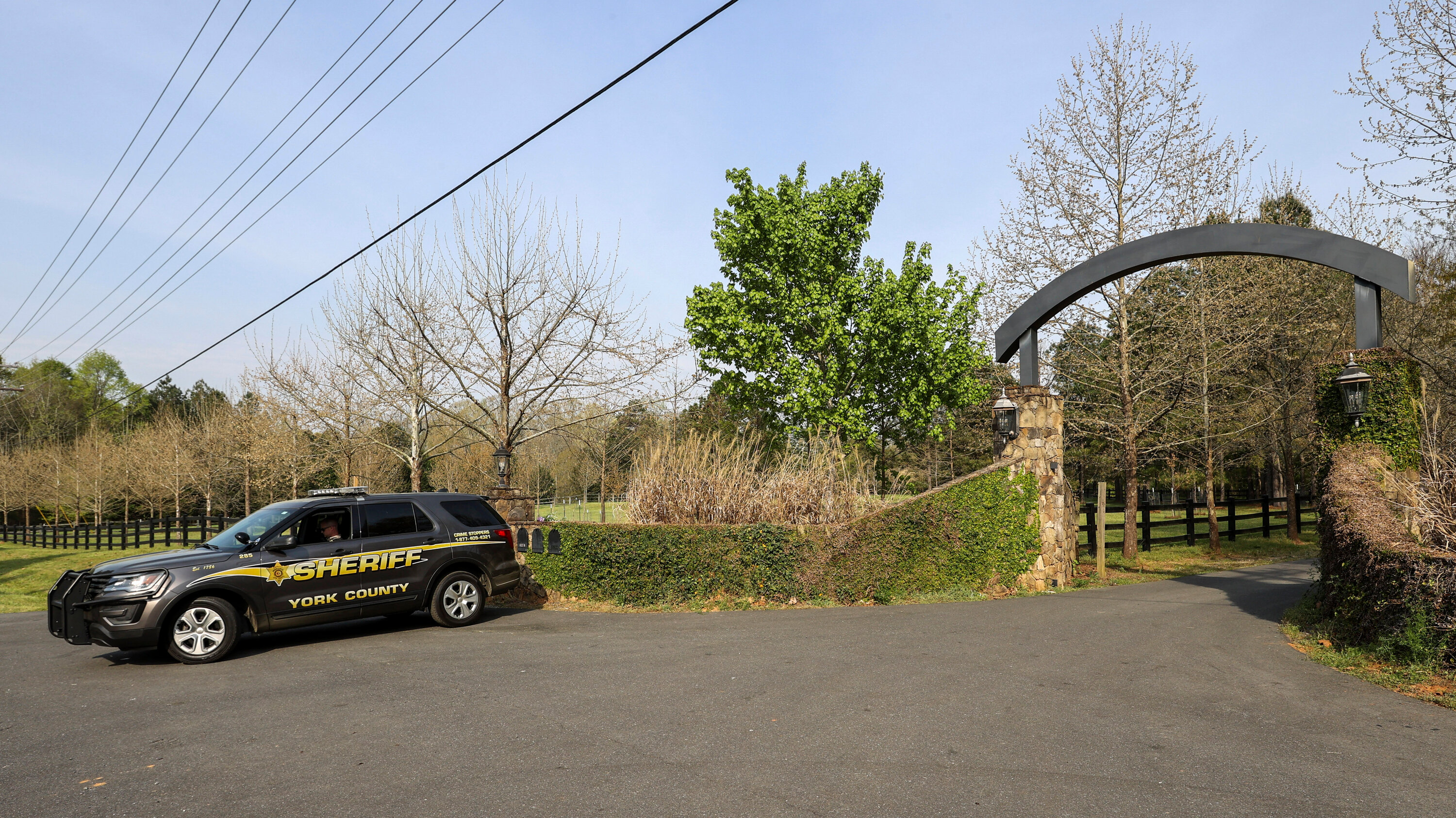 Phillip Adams, a former N.F.L. cornerback, killed five people and seriously injured a sixth in the town of Rock Hill, S.C., on Wednesday before taking his own life, the authorities said.CreditCredit…Nell Redmond/Associated Press

A neighbor shot and killed a doctor, the doctor’s wife and their two grandchildren inside their house in Rock Hill, S.C., as well as an air-conditioning technician who was working outside the home on Wednesday afternoon, the authorities said.

The gunman, Phillip Adams, 32, later shot and killed himself inside his own home as law enforcement officials tried to negotiate with him, the authorities said. Mr. Adams was a former professional football cornerback who had been on the rosters of six teams over six seasons in the N.F.L.

The authorities said he had fatally shot Dr. Robert Lesslie; his wife, Barbara; and two of their grandchildren. The York County Coroner’s office identified the children as Adah Lesslie, 9, and Noah Lesslie, 5. The website of a medical office where Dr. Lesslie, 70, worked said that he and his 69-year-old wife had eight grandchildren.

Mr. Adams also fatally shot James Lewis, 38, an air-conditioning technician who had been working outside the Lesslies’ home, the authorities said. A second air-conditioning technician was taken to a hospital with serious gunshot wounds, according to officials with the York County Sheriff’s Office. The technician, whose name was not released, was in “very critical” condition, the sheriff, Kevin R. Tolson, said at a news conference on Thursday.

Sheriff Tolson said there was “no indication” that Mr. Adams had been one of Dr. Lesslie’s patients, although that was one of many questions investigators were trying to answer. He said that investigators did not know what had led to the shooting.

“There is nothing about this right now that makes sense to any of us,” Sheriff Tolson said.

A man who identified himself as Mr. Adams’s father told a television station in Atlanta that his son had committed the killings and had then taken his own life.

“I can say he’s a good kid. He was a good kid,” the man, Alonzo Adams, said. “I think the football messed him up. I don’t think he ever did anybody any harm.”

Alonzo Adams said he knew Dr. Lesslie and had even been his patient a “long time ago.”

“I know they were good folks down there,” he said. “I don’t know what happened or not. We’re going to keep them in our prayers. You all keep us in your prayers.”

Dr. Lesslie was a prominent physician in Rock Hill and had started a local medical center. He and his wife had lived in the city for 40 years, had four children and sang in the choir at the First Associate Reformed Presbyterian Church, said Mayor John Gettys, who was a friend of the family.

Mr. Gettys said that Dr. Lesslie was known for playing the bagpipes and that Barbara Lesslie had a “beautiful voice.”

She volunteered to help adults with special needs and every year helped run a camp in North Carolina for adults with disabilities. Dr. Lesslie had practiced medicine in Rock Hill, which is about 25 miles southwest of Charlotte, N.C., since 1981 and was a specialist in emergency medicine, according to the medical office where he worked. 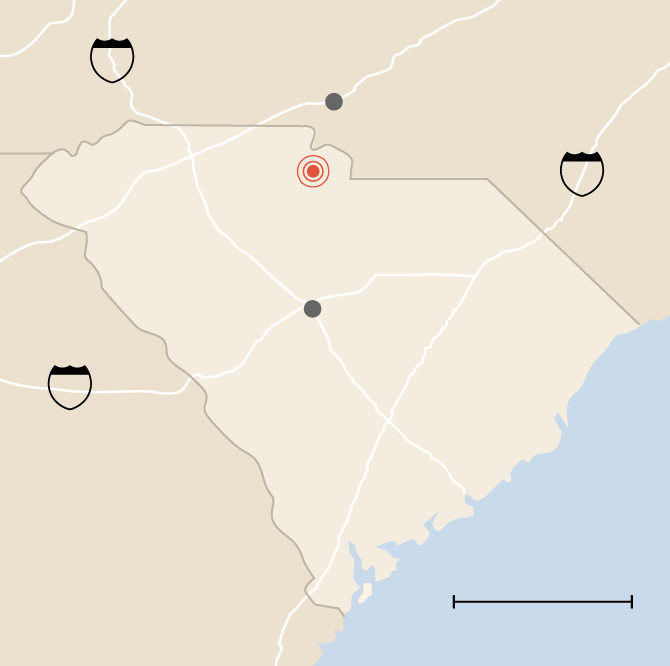 Dr. Lesslie had also been a newspaper and magazine columnist, and the author of several nonfiction books about emergency medical workers. He helped law enforcement officials by providing space for nurses to examine sexual assault victims, Sheriff Tolson said.

“Today, everyone is grieving, and I think we’re going to mourn for some time,” said Mr. Gettys, who added that he last saw the couple at church on Sunday. “They were just like always — happy and loving and engaging,” he said.

Representative Ralph Norman, a Republican whose district includes Rock Hill, said in a statement that he and his wife, Elaine, were close friends with the Lesslies.

“I cannot begin to describe the heartache and pain Elaine and I are feeling,” he said on Twitter. “To know the Lesslie family is to love them.”

The shooting happened at about 4:45 p.m. on Wednesday. Sheriff Tolson said that Mr. Adams forced his way into the Lesslies’ home, which is about a quarter-mile from the house Mr. Adams shared with his father. When the police arrived, the sheriff said, they found Dr. Lesslie, Barbara Lesslie and the two grandchildren in a back room. All four had gunshot wounds. Mr. Lewis was found outside, he said.

Sheriff Tolson said that the police had not been able to determine whether anything was taken from the home. “We did recover evidence at the scene that linked Mr. Adams to that area — definitively,” he said, declining to elaborate.

Law enforcement officials obtained a search warrant for Mr. Adams’s home. After trying to negotiate with Mr. Adams, the police found him in a bedroom, dead from a self-inflicted gunshot wound, Sheriff Tolson said.

Sheriff Tolson said Mr. Adams had used two guns, a .45-caliber and a 9-millimeter. He said there was “no indication” that the guns had been illegally obtained.

Mr. Adams was born in South Carolina. He played college football at South Carolina State University and was drafted in the seventh round by the San Francisco 49ers in 2010. He played all but one game his rookie season, then split time between the New England Patriots and Seattle Seahawks in 2011. Mr. Adams spent the following two seasons with the Oakland Raiders. In 2012, he sustained two concussions within a three-game period.

He played his last two seasons with the Jets and the Atlanta Falcons. During his six-year career, he appeared in 78 games. He also was a punt returner, one of the most dangerous roles in football, in three of his six seasons.

It was not clear if Mr. Adams’s relatives would have his brain sent to researchers who could determine whether he had chronic traumatic encephalopathy, the degenerative brain disease associated with repeated head trauma. It has been associated with mood swings and outbursts.

The disease can be diagnosed only posthumously — a process that often takes months — though research by scientists at the Boston University School of Medicine has shown that memory loss and trouble focusing, following directions and handling everyday tasks are more useful in predicting C.T.E. than behavior symptoms.

In a statement read by the sheriff, relatives of the victims said they were “truly in the midst of the unimaginable.”

The family said they knew that “there are no answers that will satisfy the question ‘why?'” They added, “Our hearts are bent toward forgiveness and peace.”

Chelsea Dungee Was Ready for Her W.N.B.A. (and Yacht?) Moment

Charli Collier Is the No. 1 Pick in the W.N.B.A. Draft

‘Do I Really Belong Here?’: Korean Americans in the N.B.A. Wonder

At the Masters, Lee Elder Gets Another Moment in the Spotlight
For Masters Second-Timers, a Chance at a More Normal Augusta National